An All American at Home in Denmark

And now a soccer player at the College of St. Rose in Albany.

Any one of these recognitions would be the highlight of an exemplary college career. But for Dryden High graduate Hannah Wildenstein, these were highlights of just 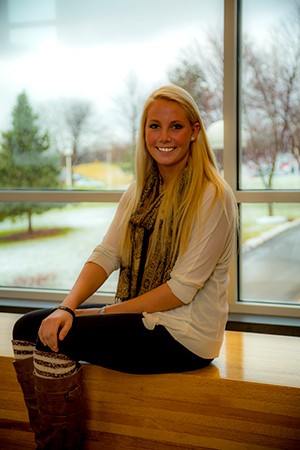 "I guess I am busy," she says (and says just about any time you see her). It begins, as it should, in the classroom where Hannah majored in Business Administration and maintained the above-3.5 GPA required for PTK. Then, off to the soccer field where she enjoyed a remarkable career with the Panthers women’s team, earning national honors and attention from colleges throughout New York. And, wouldn’t you know, she also headed off to Denmark for a six-month stay at a prestigious soccer academy this past winter.

"It’s just soccer, soccer, and soccer," she says, with a smile betraying what was her primary interest in life, improving on the soccer field.

"And some skiing in the Alps." Another smile, this one betraying yet another interest in life, although this one came with stern warnings from Tompkins Cortland staff members about skiing at "reasonable speeds" and "slow speeds" and "really slow, bunny hill speeds, or why don’t you just hang out in the lodge?"

Another smile, and then she says she has an app on her phone that lets her know how fast she’s skiing. Thus far she has topped out at 79 mph.

The knees, she was reminded by those staff, take care of the knees.

At the same time concern was expressed about her passion for reckless skiing, there was an absence of concern for her ability to acclimate to a new culture, in a faraway land, and to a foreign tongue. And this was explained, rather simply, by yet another interesting fact about Hannah: She speaks Danish. Fluently. Her mother hails from Denmark, and Hannah grew up speaking the language. So, the transition?

"I have a slight accent," she says, "but people like accents, like when someone comes here from England."

Back to the United Way before we run out of words summarizing her accomplishments: That relationship began in high school when Hannah was part of the Youth and Philanthropy program through BOCES and the United Way. That morphed into the FOCUS program, a United Way initiative Hannah helped to bring to Dryden. Then she volunteered on the United Way’s community investment board and for a handful of other organizations. And then, finally, with years of experience behind her at the ripe old age of 19, she was chosen as the youngest-ever co-chair of the Community Campaign. One of her co-chairs recently completed a 40-year career at Ithaca College, the other is the CEO of CFCU.

"At first, I felt a little funny being the youngest person in the room, but I got used to it," she says. "It’s a huge commitment from August to March, with some weeks that have three meetings ... and also reading over letters and campaign details and finding new businesses. But it’s good experience and helps the community."

And with plans to pursue future studies in business (and certainly more soccer), it is experience that should serve her well.