From the South Bronx to the Commencement Stage

Dr. Randol Contreras, an Assistant Professor of Sociology at the University of Toronto, began by explaining how he had arrived at Tompkins Cortland.

It is the only commencement speech given in the new gymnasium's eight-year existence that has elicited a standing ovation.

Dr. Randol Contreras, an Assistant Professor of Sociology at the University of Toronto, began by explaining how he had arrived at Tompkins Cortland. "I was born in 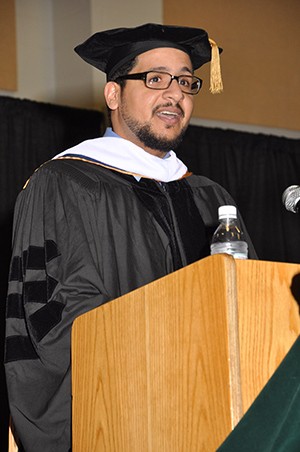 "And the high school I eventually attended was a locally zoned high school that warehoused the area's most underprepared students. So when I attended a four-year

college after graduating from high school, I didn't do well. I was lost."

"So one day, while I was on my way to take a test in sociology, I just stopped in my tracks. So no more school. I was going to strike it rich in the crack cocaine economy. … But by the time I had mustered the courage to be a crack dealer, I had come in during the decline stage when crack use had started to decrease. "

"I failed miserably. I was a really bad drug dealer."

That failure turned out to be the key to his redemption and eventual success.

"I had a good neighborhood friend who was attending SUNY Cortland and she was always concerned about my drug involvement."

"One day, when we crossed paths outside of class, (Professor Ochs) stopped me to chat. He told that he lived my work and that he loved my writing. He told me that he expected great things from me." And he suggested that I pursue a career in academia. But at that time I didn't know what the word ‘academia' meant. … When I found out what it meant, I was speechless."

"… I saw that I could be somebody outside of drugs, violence, and crime."

Dr. Contreras eventually graduated from Tompkins Cortland, returned to the City University of New York to earn a bachelor's, then earned his Ph.D. in Sociology from The Graduate Center of the City University of New York. His book, The Stickup Kids: Race, Drugs, Violence, and the American Dream, revisited the South Bronx to explore the lives of old acquaintances who robbed drug dealers. The book has won the 2015 Albert J. Reiss Jr., Distinguished Scholarship Award (Crime, Law Deviance/ASA); the 2014 Special Recognition Award for an Outstanding Monograph that Advances the Understanding of Urban Life (Society for Urban, National, Transnational/Global Anthropology); and the 2013 UC Press Exceptional First Book Award (literary organization, PEN Center USA). It has also received the distinction of being a Finalist for the 2014 C. Wright Mills Award and Honorable Mentions for the 2015 Mirra Komarovsky Award, 2015 Distinguished Scholarship Award (Pacific Sociological Association), and 2015 Distinguished Contribution to Book Award (Race, Class, and Gender/ASA).

Contreras ended his remarks by urging the graduates to appreciate the value of their public education.

"I have faith in you. I have faith that you now have the intellectual tools to make it happen. Congratulations."