A Student of the World

Living in the shadow of the world's greatest mountains last year, Tompkins Cortland alum Justine Lewis spent most of her time working for something as seemingly small and simple as clean water.

In Nepal as part of an internship through Cornell University, from which she now holds two master's degrees, Justine's work was only the most recent realization of a dream that was in its infancy when she began studying at Tompkins Cortland in 2007 as a Service Tradition Scholar.

"When I was at Tompkins Cortland, my advisor, Professor Ken McEwan, encouraged me to look at the international perspective. I think he could see I had that in me," she says. "You know when people have a bigger dream for yourself than you do?" 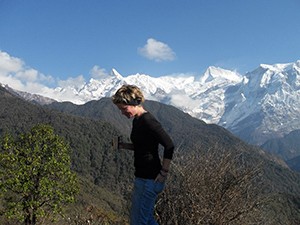 That dream has taken her nearly around the world. Justine studied in London as part of a Human Services internship while at Tompkins Cortland, visiting Egypt and Spain on her travels. After graduating from Tompkins Cortland in 2008 with a degree in Human Services, she earned her bachelor's at Ithaca College, traveling to the Dominican Republic, India, and Mexico. Following that, she began studying for the first of two master's degrees she has earned from Cornell University, Human Development and Public Administration, and eventually spent five months in Nepal as part of an internship.

"Being in Nepal was one of the best experiences of my life," she says. "The people were just absolutely amazing, the culture, the land, everything. It really helped to give me true international exposure and experience, just like Ken said."

Upon returning to the United States in May, she was asked to address the graduating class of her master's program (she was also the student speaker at Tompkins Cortland's 2008 Commencement), only a day after returning from Nepal. "Major culture shock," she says. "I had a really hard time believing all of this was real. It is so remarkably different, what we have here, compared to the people in Nepal. Just being able to take a hot shower with clean water is such an unbelievable luxury for us."

She's been in the U.S. since spring; but, like much Professor McEwan knew, she is not content to sit still for long.

"I really need to get traveling again," she says.

"I was named a Presidential Management Fellow in April 2013 (a prestigious U.S. government fellowship) and will be working for USAID, the U.S. Agency for International Development, as a public affairs officer for two years. I'll also be taking the Foreign Service Test in the spring, and my hope is to work in Foreign Service and eventually start my own non-profit foundation."