Faculty and Staff Honored with Awards for Excellence 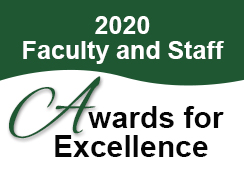 Annual awards for excellence by faculty and staff at Tompkins Cortland Community College have been announced. Traditionally recognized at commencement, the awards are presented to acknowledge consistently superior professional achievement.

Sandy Moser, professor of nursing, received the Chancellor’s/Trustees’ Award for Excellence in Teaching. She was honored for her work as the “clinical coordinator” for the nursing department, developing materials that are available for use by all of the clinical instructors in the department. In addition to being available to her students, her work mentoring adjunct nursing faculty was cited as a major factor for increased consistency in clinical performance expectations.

Kerry Curran, assistant professor of English, also received the Chancellor’s/Trustees’ Award for Excellence in Teaching. Her passion and enthusiasm about her teaching has led her to collaborate with adjunct instructors for a mentorship program. She was the driving force behind the creation of a “Student Referral Guide” for use by faculty. In addition to her classroom work, Kerry has participated in several other campus activities, including the establishment of the student club S.T.A.N.D. (Students Take Action and Negotiate Dialogue). By serving as the faculty co-advisor to S.T.A.N.D. Kerry has provide guidance on several projects, including a college-wide voter registration drive.

Jonathan Walz-Koeppel, database administrator in the campus technology department, received the Chancellor’s/Trustees’ Award for Excellence in Professional Service. He was recognized for excellence in his job responsibilities, which include his critical role in programming mandated updates and maintaining required reporting processes for SUNY and other oversight agencies. He also managed many student-facing projects that have greatly improved our internal workflow and student experience, and he has also been very active in our College community, co-chairing the College Senate among his committee work.

Teri Evener, secretary in the student success department, received the Chancellor’s/Trustees’ Award for Excellence in Classified Service. She was credited for repeatedly demonstrates outstanding achievement, skill, and commitment to the College. A team player with exceptional customer service skills, Teri is noted for her ability and willingness to work with students to remove as many barriers as possible to make communication effective and find a solution to their problems. She also is an involved member of the broader campus community, playing a key role in revising the bylaws of our college governance committee, serving on numerous Chancellor’s Award committees, the Strategic Planning committee, and the Holiday Luncheon Committee.

Marjolein Schat, adjunct assistant professor of biology, received the Chancellor’s/Trustees’ Award for Excellence in Adjunct Teaching. She has been at the College for five years, teaching a range of classes. Marjolein has worked with other faculty to revise and reformat labs and course exams while also taking the lead on developing new laboratory work for an environmental studies course. She was noted for her enthusiasm and commitment to her classes, as well as being one of the most respected and adaptable faculty members.

The Chancellor’s/Trustees’ Awards for Excellence are selected through a process that starts with a nomination and includes a committee review before being forwarded to SUNY by the College president. Final determination of the award is made by the SUNY Chancellor following another review.

In addition to the SUNY Chancellor’s/Trustees’ Awards for Excellence, the College also recognized exceptional employees within the Faculty Student Association. These awards were chosen by the FSA Board of Directors.

Tamara McMullen, head teacher in the childcare center, and Robert Rice, athletics facility and event coordinator as well as head coach for women’s soccer were each honored with the Faculty Student Association Award for Program Support.