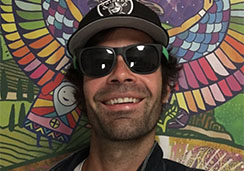 Tompkins Cortland adjunct instructor Zack Ford's feature script The Watcher has been approved to start shooting in April. The psychological thriller is the first feature of production company Spooky Pictures, which is based in Los Angeles and was formed by Hollywood veterans Roy Lee (The Ring, It) and Steven Schneider (Pet Sematary). The Watcher is the first in a multi-film deal Spooky Pictures has reached with Image Nation, an international film production and media company.

Set in the midst of a city-wide panic over an active serial killer, The Watcher follows a young woman who moves into a new apartment with her fiancé only to be tormented by the feeling that she is being stalked by an unseen watcher in an adjacent building.

Ford is a graduate of the Tisch School of the Arts at New York University. Upon graduation, his thesis screenplay SCAR 3D was turned into a film that has the distinction of opening in theaters around the world as the first live-action, hi-def, 3D horror film. He currently teaches Screenwriting (ENGL200) online through the College. He has taught a total of seven semesters at the College, also teaching Advanced Screenwriting (ENGL216) and Short Narrative Film (ENGL135).