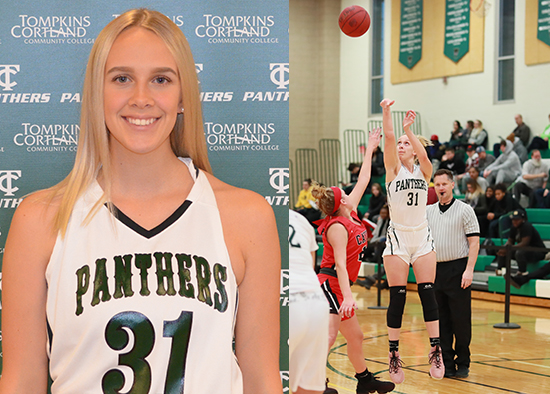 Tompkins Cortland Community College sophomore Taylor Day (Brooktondale/Ithaca H.S.) has been voted one of the best players in the region. In voting by the coaches in the NJCAA Region III, Day was the seventh highest vote getter, earning her second team All-Region honors. It is the first time Day has earned all-region recognition and the ninth time a Panther has been honored in the history of the women’s basketball program.

Day was the top three-point shooter in the region by percentage, making 35.8% from behind the arc. She completed he season with 57 three-pointers, the most in school history. Her scoring average of 16.0 points per game was sixth in the region this year and the fifth best single season in the history of the Panthers. She also finished in the top 15 in the region in overall field goal percentage by making 40.3% from the floor.

Day had previously been named to the Mid--State Athletic Conference all-conference team.