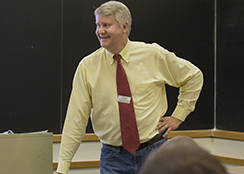 Tompkins Cortland Community College Professor David Flaten has won a Fulbright Award. The U.S. Department of State and the J. William Fulbright Foreign Scholarship Board have announced that Flaten has received a Fulbright U.S. Scholar Program award to Colombia.  Flaten will teach at the Technological University of Pereira as part of a project to teach graduate and undergraduate courses on “Human Uses and Adaptations of the Natural Environments in the Americas” during the spring semester of 2021. He will be teaching an elective course in the Management Science area serving the Industrial Engineering Program that will be highlighting historic uses of the landscape.

Flaten is a history professor at Tompkins Cortland. As a Fulbright Scholar, he will share knowledge and foster meaningful connections across communities in the United States and Colombia. Fulbrighters engage in cutting-edge research and expand their professional networks, often continuing research collaborations started abroad and laying the groundwork for forging future partnerships between institutions. Upon returning to their home countries, institutions, labs, and classrooms, they share their stories and often become active supporters of international exchange. Flaten has always been a strong advocate of educating global citizens, both through his involvements with the College’s study abroad program and by inviting international speakers to his classroom.

A native of Minnesota, Flaten has been at Tompkins Cortland since 2003, teaching a variety of history courses. He was honored with the SUNY Chancellor's/Trustees' Award for Excellence in Teaching 2009 as well as the College's Award for Excellence in 2015. He has a B.A. from Gustavus Adolphus College (Minn.), M.A. from Fordham University, and Ph.D. from Fordham University.

The Fulbright Program is the flagship international educational exchange program sponsored by the U.S. government and is designed to forge lasting connections between the people of the United States and the people of other countries, counter misunderstandings, and help people and nations work together toward common goals. Since its establishment in 1946, the Fulbright Program has enabled more than 390,000 dedicated and accomplished students, scholars, artists, teachers, and professionals of all backgrounds to study, teach and conduct research, exchange ideas, and find solutions to shared international concerns. The Fulbright Program is funded through an annual appropriation made by the U.S. Congress to the U.S. Department of State. Participating governments and host institutions, corporations, and foundations around the world also provide direct and indirect support to the Program, which operates in more than 160 countries worldwide.