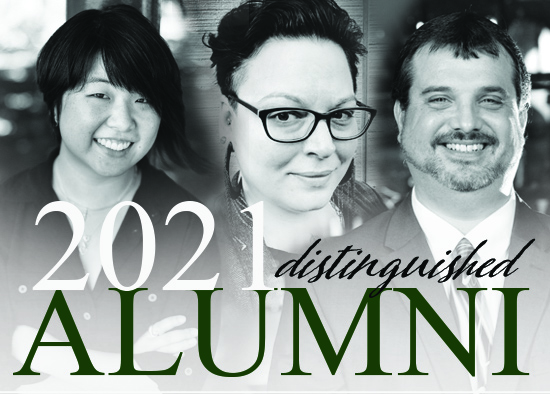 The Award recognizes alums who have distinguished themselves in their career and service to the community. The award winners are traditionally recognized during the College’s commencement ceremony. This year the trio was featured in a panel discussion as part of the virtual commencement.

Marci Calabretta Canico-Bello is a 2009 graduate with two degrees: creative writing and liberal arts and sciences: general studies. She went on to earn dual bachelor’s degrees in English and creative writing from Carnegie Mellon University in Pittsburgh and her MFA in creative writing, poetry, from Florida International University. She has won several national literary awards and has worked in various positions promoting culture and literacy, including serving as a poetry mentor for high school students, a book fair program coordinator, a magazine poetry editor, and a founding co-director of the Adoptee Literary Festival in South Florida.

She was nominated for her community involvement, starting with her time at Tompkins Cortland when she was a leader of the Writers’ Guild and a member of Phi Theta Kappa. That commitment to her community expanded when she continued her education and began her professional career in Florida, where she has been involved with bringing poetry to as many people as possible by organizing and managing a program that bring authors to public school classrooms and working as manager of a program that distributes 150,000 free books to children in the Miami community.

Crystal Lyon is a 2005 graduate of the graphic design program. She earned her BFA from SUNY Cortland and her MFA from the Academy of Art University in San Francisco. She has taught art and art history at SUNY Cortland and continues to teach and serve as a tutor for art and communications classes at Tompkins Cortland. She has also worked at Cortland Repertory Theatre in several capacities, including helping coordinate a program of youth art workshops and collaborating on Ghosts in the Park and Stories in the Park.

Lyon coordinated and painted the Black Lives Matter street mural in Cortland, planned the Cortland County Steampunk Festival and several art exhibitions, and was the artist, project planner and manager for the Cortland Corset Company mural and restoration. These projects were among those highlighted in Lyon’s nominations, with several supporters pointing out the extensive work she has done to help the Cortland community as well as students at Tompkins Cortland.

Jason Sidle graduated in December 1994 with a hotel technology degree. He followed that with a bachelor’s degree in hotel and resort management from the Rochester Institute of Technology and his MBA from the University of Phoenix. After several years in the industry, working for a variety of companies from international hotel chains to local restaurants, he was one of the original employees of Coltivare, Tompkins Cortland Community College’s farm-to-bistro restaurant in Ithaca. Shortly after being hired as General Manager in 2014 he was promoted to Director of Operations, a position he has held since.

Sidle was nominated for his dedication to Coltivare, the College, and the community. Under his leadership the restaurant has become a valuable community partner, hosting community cooking classes and a variety of charity events. His enthusiasm for teaching and sharing his experience has helped both the staff of the restaurant and students in the various culinary programs that are housed at Coltivare.