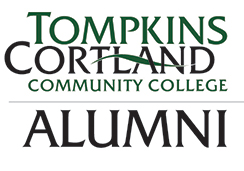 The Distinguished Alumni Award of Tompkins Cortland Community College recognizes alums who have distinguished themselves in their career and service to the community. This year, the committee selected three worthy recipients to honor: Suzanne Burnham, F. Michael Catalano, and Julie Fairchild Niederhofer.

Suzanne Burnham is a 1997 graduate of the human services program and is now the Academic Outreach and Program Coordinator for College Initiative Upstate (CIU). She was nominated for serving as a role model and mentor to dozens of court-involved and formerly incarcerated CIU students who attend Tompkins Cortland.

After graduating from Tompkins Cortland, Burnham worked at Willard Drug Treatment before getting her bachelor’s degree from Empire State College. She has been with CIU for four years, helping more than 100 people improve their lives by attending college, including through a first-in-the-state college prep alternative to incarceration program she helped to create.

F. Michael Catalano is a 1979 graduate of the criminal justice program and is the Chief of Police for the City of Cortland. He was nominated for his dedication, growth, and commitment to his career as a police officer and the community.

Over the course of a 40-year career in law enforcement that started as a correction officer in the county jail, Catalano has served as a patrolman, sergeant, detective, lieutenant, deputy chief, and, since 2009, chief of the Cortland Police. During his tenure are chief the department earned its first Certificate of Accreditation from the New York State Law Enforcement Agency Accreditation Council for excellence and professionalism. Other highlights include the creation of both a Community Oriented Police Officer position and a School Resource Officer dedicated to the Cortland Enlarged City School District.

Catalano has a bachelor’s degree from Empire State College and is a graduate of the FBI National Academy.

Julie Fairchild Niederhofer is a 2010 graduate of the nursing program. She is the Sampling Services Nurse Manager for Cayuga Health Systems. Her nomination cited her skilled and compassionate care, noting she serves as a source of consistency, strength, knowledge, and positivity to her colleagues

Niederhofer has a bachelor’s degree in nursing from Keuka College, and has worked as a Cancer Nurse Navigator at Guthrie Cortland Medical Center, a Care Coordinator in the Metabolic and Bariatric Surgery Program of Surgical Associates of CMA, and as a Registered Nurse at Cayuga Medical Center. Earlier this year she was part of a team from Cayuga Health to spend a month in New York City assisting with the pandemic response by working in an intensive care unit.

The Distinguished Alumni Award is traditionally presented at the College’s commencement in May, but was delayed this year when the May ceremony was cancelled. When the hoped-for December in-person ceremony was also cancelled, the awards were delivered to each winner individually this week.