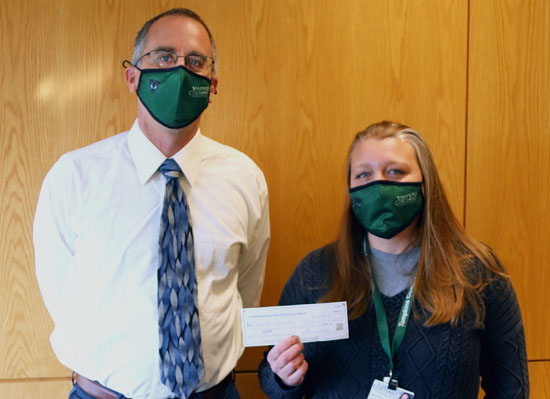 Michelle LaMorte (shown here with Provost Paul Reifenheiser) has been honored with the Continuing Education Association of New York (CEANY) Regional Outstanding Adult Continuing Education Student Award for the 2020-21 academic year. LaMorte, who graduated from Tompkins Cortland Community College in May 2021 with a degree in graphic design, was the winner for the West Region, one of three regions in the state. Her award was announced at the CEANY annual conference in Saratoga Springs last month.

The $1,000 award recognizes adult students who have achieved excellence by demonstrating persistence, drive, and success in overcoming obstacles to achieve their educational goals. LaMorte was nominated for the award by Associate Professor Christine Shanks, chair of the graphic design program, who noted that she worked full time to support her family while taking classes. “Michelle made many personal sacrifices in order to take advantage of as many opportunities as she could while she was a student at the college so upon graduation she could achieve her career goals,” Shanks wrote in her nomination letter. “These factors have caused her to experience high levels of stress and pressure while earning her degree but Michelle has always been an exemplary student, a strong team player and collaborator, a resource for other students, and an example of organization, positivity, and persistence to her fellow students.”

LaMorte was a dean’s list student and filled several roles, including Design Team Production Manager, for Ke’lab, the College’s literary visual arts journal. She was a Pathways Scholar, a member of the National Society of Leadership and Success, and the recipient of several scholarships and awards. She graduated with honors in May 2021 and is planning to continue her education with hopes of becoming an arts teacher.

CEANY is a statewide organization with more than 500 members representing all public higher education across the state, including both SUNY and CUNY two and four-year institutions. This marks the sixth time in the last nine years that Tompkins Cortland Community College has been named a winner of a James C. Hall Award from CEANY.