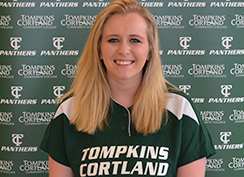 The life-saving actions of freshman Paige Graham have earned her recognition from the Tompkins County government.

Before the Tompkins County Legislature’s Public Safety Committee meeting on May 16, Graham was presented the first-ever Tompkins County Champion Award by the Tompkins County Sheriff’s Office. The award was created to honor an individual who displays exceptional courage, presence of mind, and swiftness in action in an emergency situation.

A Groton resident, Graham was recognized for performing CPR, with the assistance of Tompkins County 9-1-1, on her father after he had suffered cardiac arrest on January 3, 2019. Bruce Graham lived, thanks largely to the actions of his daughter.

Tompkins County Sheriff Derek Osborne praised Graham for her exceptional calm and outstanding skill in a stressful emergency situation and commended her for her life-saving actions, saying, “Community members should be recognized for these moments.”

Graham is a liberal arts and sciences major at the College, and was a member of the basketball and softball teams this past year.

Read more about Graham and the award at The Ithaca Voice.