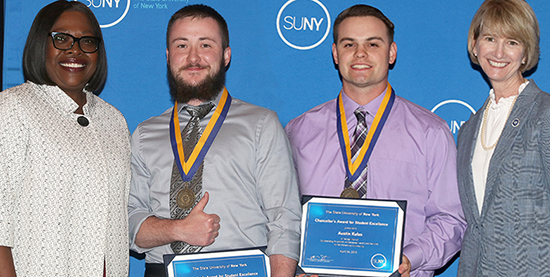 Two Tompkins Cortland Community College students have been recognized with the 2019 Chancellor's Award for Student Excellence by the State University of New York. Nicholas Brown and Austin Kulas were among the 210 students honored by SUNY Chancellor Kristina M. Johnson at a reception in Albany this week.

“Today’s award recipients emerged from their campuses this year as the top scholars, athletes, performers, and achievers, as well as a tremendous source of inspiration,” said Chancellor Johnson during the ceremony on Wednesday. “The students being recognized today made the choice to become leaders on their campuses, prioritize their studies, and serve their communities. Congratulations to this year’s awardees, and I applaud you for pursuing excellence in all that you do.”

Brown, a native of Spencer, was the president of the Phi Theta Kappa Honor Society and was a student representative and Finance Committee member of the Faculty Student Association Board of Directors. A Dean’s List student, he will graduate next month with a computer science degree.

Kulas, a resident of Moravia, has excelled both in and out of the classroom. He is a Dean’s List student and member of Phi Theta Kappa, as well captain of the College’s baseball team and member of the Athletics Advisory Board.  A criminal justice major, Kulas will also graduate next month.

The Chancellor’s Award for Student Excellence was created in 1997 to recognize students who have best demonstrated, and have been recognized for, the integration of academic excellence with accomplishments in the areas of leadership, athletics, community service, creative and performing arts, campus involvement, or career achievement.

Each year, SUNY campus presidents establish a selection committee, which reviews the accomplishments of exemplary students. Nominees are then forwarded to the Chancellor’s Office for a second round of review. Finalists are then recommended to the Chancellor to become recipients of the award.