From Refugee Camp to Tompkins Cortland

She is smiling so much, talking about the scholarship and school, it is hard to know when the next question will land like a stone in the dirt. Nobel Htoo is from Burma and spent much of her life in a refugee camp in Thailand. The stories can't all be good. 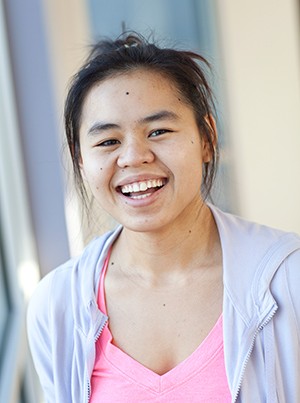 prestigious a scholarship as we have. It is earned, not given, with a serious commitment to community service and academics. Past recipients have gone on to successes including master's degrees from Cornell and service-oriented work across the world. Nobel has earned it.

She volunteers at Loaves and Fishes in Ithaca, providing meals to those in need. She also acts as the official non-official translator for Ithaca's Burmese community. "There are about 30 families," she says, "and they call me when they need translating help. I feel like I am responsible to help. I also speak Korean, so I am able to translate for other people in Ithaca. It's something I can do to help."

She is studying Liberal Arts and Sciences - Math/Science with thoughts of becoming a nurse or transferring to a pre-med program. It's been academic journey for her, "I got to Ithaca High School when I was 18, and they put me into ninth grade," she says. "There wasn't much education in the refugee camp, so I had to go three and a half years." And she follows this laughing and shaking her head, gentle admonishment for the bureaucracy.

"I wanted to become a doctor, but I'm not sure now, maybe a nurse practitioner," she says. "My grandmother was a nurse when I was young. My sister, the youngest one, passed away in the refugee camp. She was sick and we didn't have any doctors, the medical care there was not good. The nurses were not educated. So I'd like to learn and go back and help, maybe open a hospital."

She is looking forward now, not smiling. Her eyes are clear and bright; her face is focused and open.

"It's not easy though, I have to take chemistry and calculus, and I took Calc 2 and, no …" and she shakes her head and is smiling and laughing again, leaning forward with her hands clasped together, this wonderful sigh. "Calc 2, just no, I don't know. It drove me crazy. I'll take it some other time."