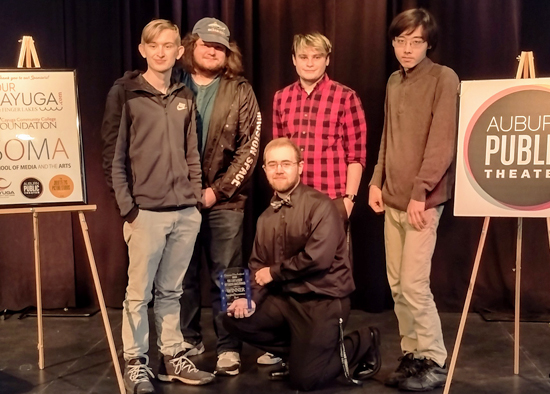 Several current students and recent graduates of the communication and media arts programs at Tompkins Cortland Community College were among the winners at the recent Cayuga Film Festival. Two projects were voted the best in their category while two other projects received honorable mentions. The Festival highlights the work from high school, college, and emerging filmmakers under the age of 30 in New York State.

“I couldn’t be more proud of these of these students and graduates,” said Professor Chris Xaver, chair of the College’s Communication and Media Arts program. “These students put in hundreds of hours of work on these pieces, and they deserve the recognition.”

Winning in the Emerging Filmmakers Documentary – Short category was Taking Back Power. A story of how certain people haven refused to let the pandemic stop them from doing what they can to make our community better. “Taking Back Power was a learning lesson for the six students who worked on this project,” said Xaver. “They did scenes and sections over and over to raise their work to the level of being able to submit it to a festival. They really worked hard revising and tweaking the project to make something they and hopefully the community would be proud of.”

Winning in the Emerging Filmmakers – Animation category was Friendsheep. “Tak McKee not only sculpted each one of those little creatures, but then had to painstakingly move them millimeter by millimeter to make the animation,” said Xaver. “His story is deep and shares the meaning of Christmas. And he did all of it by himself.”

Earning Honorable Mention in the College Filmmakers – Narrative category was Chrysanthemum. This film was the capstone project for a film class last spring, where the entire class works on the project from start to finish over the course of the 15-week semester. “It’s a major project! This group worked together cohesively to create a film that was ambitious. Doing this while still dealing with Covid restrictions, their efforts were beyond impressive,” said Xaver. “The entire crew deserves praise for pulling together to create a film worthy of this honor during trying times. They did it on time and, as we say in the business, under budget.”

Also earning Honorable Mention honors was a Music Video. The video was the offshoot of the College’s commencement celebration video. “Justin Spicer and Emalee Sickles did such an amazing job on the music video,” said Xaver. “After they shot and saw the raw footage of Alice Goddard singing for the College’s commencement celebration, Justin wanted to create a version of her song for her. Something that showcased her pure, beautiful voice and allowed Emalee’s camera work to shine through.”