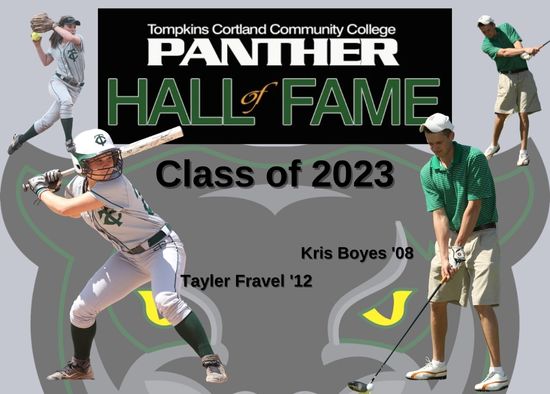 Golfer Kris Boyes ’08 and softball player Tayler Fravel (Wallis) ’12 have been selected to join the Tompkins Cortland Community College Panther Hall of Fame. The two will be inducted at a ceremony this spring, bringing the total to 16 people that have been voted into the Hall of Fame since its creation in 1999.

Boyes was Tompkins Cortland’s first national champion in any sport, winning the NJCAA Division 3 Men’s Golf Championship in 2008. He was also the Region 3 champion, the second in the history of the program, and an all-Mid-State Athletic Conference performer in his one year with the Panthers. Led by Boyes, the Panthers finished fourth in the nation in 2008, the best team finish in program history.

He followed his time at Tompkins Cortland with three years on the St. Bonaventure University golf team, earning team MVP honors in his senior year. He graduated from St. Bonaventure in 2011 with a degree in business administration.

Since graduating from college play, Boyes has continued to compete at a high level. His tournament championships include the Erie County Amateur Championship (2021), the WNY Open (2016), the Sheridan Park Club (2011, 2016, 2020), and the Cherry Hill Club (2018). He has placed in the top 15 in the New York State Golf Association Mid-Amateur championship three times, with a best finish of tied for fifth (2014).

Fravel (Wallis) was a two-time All-American softball player for the Panthers, helping the team to consecutive NJCAA Region 3 championships. The team went a combined 69-13 and qualified for the NJCAA National Championship tournament both seasons, finishing third in the nation in 2012 while she set a Tompkins Cortland record for runs scored in a season. She also set, and still holds, the school record for hits in a career while posting a career batting average of .431.

Following her graduation from Tompkins Cortland, Fravel played softball for two seasons at the University of Rochester while earning her degree in psychology. She was an NFCA All-American and NCAA all-tournament team selection while setting a school record for most hits in a season while helping the Yellowjackets to the NCAA Division III World Series for the first time in program history. After completing her playing career, Fravel was an assistant coach for Rochester for three seasons and LeMoyne College for one year.

Formed in 1999, the Hall honors former athletes, coaches, and contributors for their outstanding performance and support of Tompkins Cortland athletics. New members are selected by a committee that includes the Director of Athletics, the Athletic Advisory Board, and two current Panther Hall of Fame members. Inductions are possible bi-annually, with a maximum of three new members in each class. A plaque with the inductee's picture and description of his or her achievement is displayed at the College.